“Who knew that silence had so much to tell?” A short visit to Helsinki 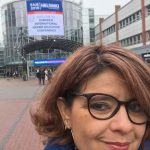 I opened the blinds and also tried to open the windows. No use. It was absolutely locked and given how early in the morning it was, I didn’t want to bother my Airbnb hosts. The Helsinki sky looked gray and rainy… people walking down the street were fully covered. I thought, “here we go again, winter…” In a way, it was the stereotypical weather that one can expect in Helsinki by the end of September…
But nothing would damp my interest. I was so curious about this city. It felt from the very beginning like a very remote place, and it was my first time here. Unfortunately, I knew that I would not have enough time to dive into the cultural landscape of the city, because my main reason to be here was to attend the conference of the European Association of International Education (EAIE) a “must-go” event for all things related to international education. And yet, I also brought with me the expectation that, in the end, I would find my way, one form or the other, to learn more about Helsinki, and its fascinating inhabitants.
As both a psychologist and multiculturalist, I am always interested in understanding how culture shapes our ways of being (actions, thoughts, emotions) and all of what I heard from Finland so far had painted a particular picture for me: regarded as the “2019 happiest country in the world” according to the 2019 World Happiness Report, Finns are also famous for the ways in which they, well, just simply prefer silence at so many moments where in many other cultures “small-talk” (especially about the the weather) not only seems appropriate, but also the socially skilled thing to do!

Therefore, I was attracted to a session at the conference facilitated by a friend of mine and his colleague (none of them Finns, by the way!) with the enticing topic of: “Finnish Life Skills: Its OK to be quiet!”.
The attendance was astonishing… people didn´t fit in at some point, and they had to keep bringing chairs to fit us all in! This was set in a big circle, where people enthusiastically answered the first question: “are you a small-talker or not?” As responses kept coming, the group seemed to be almost even between “small talkers” and “silent” people. What was evident though, is the sense that small talk is strongly encouraged as a “soft skill” that people should master in their pursuit of successful networking. Whatever happened to the skill of holding a silent space? Well, this is where we can all learn from the Finns. As some of them said, holding silence is regarded as a positive capacity that shows respect, consideration and creates a kind of freedom among speakers. A particularly fascinating contribution by a Finn participant was about the various meanings that silence is given in their culture. She talked about how, depending on context and the texture of what is happening, silence can be regarded as active and positive; active and negative; passive and positive and passive and negative. I was fascinated by this idea, but realized that in my culture (and possibly in most cultures) silence might be perceived as a monolith of awkwardness that should be filled as soon as possible. The less of it, the better. And yes, this is where small talk typically fits in (Here comes the “weather talk” again!).
Quietly on that day, I learned about the multiple meanings of silence, and remembered various silent moments in my life where communication went beyond words with whoever was involved. As a therapist, I have always used silence as a tool for creating space for the person who seeks therapy; a space that would prompt usually a deeper tone in the conversation. Well, on that day, thanks to my Finn colleagues, I was enlightened to the fact that “small talk” can sometimes be the “small” thing to do, if its done instead of something bigger, such as the capacity to hold a space that can be active and positive, and does not need to be stuffed and limited by comments like: “the weather is horrible today!”

My proposal for the enhancement of your multicultural competence? Talk about people from other cultures about what does it mean to hold silence, and if encouraged, practice this skill, that will not only bring more presence to your interactions, but will allow you to learn about the power of non-verbal communication. You see, after all, Finnish culture can teach us that we don´t have to talk all the time to feel happy and share happiness with others!